A special occasion last week called for a special meal, so after several recommendations I booked a table at Astrid & Gaston (http://astridygastonmadrid.com). This high end Peruvian restaurant now has locations in eight different countries, and its Lima flagship is currently ranked 42nd in the S. Pellegrino World’s 50 Best Restaurants List. Although the menus vary from country to country, Astrid & Gaston's Madrid location manages to capture the essence of Peruvian cuisine while fusing it with flavors and aromas of other countries and continents. 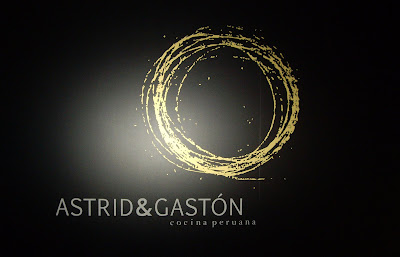 After being seated by a delightful wait staff, who attended to our every need throughout the meal and answered every question I had regarding our dishes, we were served complimentary Chifles de Platano Verde (Peruvian Unripened Plantain Chips) and Palitos de Crocanti (Breadsticks with Sesame Seeds). Not only was the presentation spectacular, which can be said about every dish we ordered, but so was the taste. The Chifles were out of this world. I have had my share of plantain chips, both fresh and commercially bagged, but those served at Astrid & Gaston, which were made right there and then, didn't have an ounce of oil on them, were as crunchy as can be, not too salty and the overpowering taste of banana that you typically find in fried plantains was nothing but a trace on this occasion. The same can be said for the Palitos. The homemade Sesame-lined breadsticks sat upright in a sea of black, white and toasted seeds, and for the first time ever I tried all three in the same bite, which made for a delicious combination of flavors. It was the first sign of the Asian influence Astrid & Gaston have incorporated into their dishes.

As we noshed on our Chifles and Palitos, we were served our obligatory Pisco Sours and boy were they incredible. Astrid & Gaston add a unique touch with their homemade simple syrup, which along with Persian Lime did a relatively good job taming the stiff Pisco. Drinkers beware, these Pisco Sours pack a heavy punch but are well worth the 12 Euro price tag. 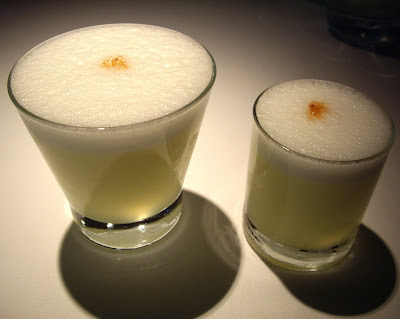 We were next brought another complimentary appetizer consisting of four different kinds of homemade breads accompanied by Uchucuta dipping sauce, made from Queso Fresco (Crumbly Fresh Cheese), Queso Tierno (Semi-Hard Fresh Cheese), Hierbas Aromaticas (Fine Herbs), Aceite (Oil) and Rocoto (Capsicum found in Central and South America.) Typically served with corn or potatoes, the Uchucuta made for a savory combination of flavors and textures with  the slightest hint of cheesy taste. From right to left, the Boniato (Caribbean Sweet Potato) bread was sweet and delicate, but the doughiest of the four. The Patata (Potato) bread was much lighter and simpler and my second favorite behind the Cebolla y Cilantro (Onion and Cilantro/Coriander) bread, which packed subtle hints of both vegetable and herb. The fourth, the Pan Tradicional (Traditional Bread Roll), was much better than your standard roll. Be sure to take it easy on the breads, however. Although small, they are very filling and almost prevented me from being able to finish my main course. 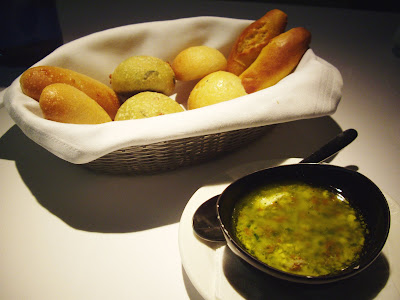 One last surprise was in store before we were brought the first of the two appetizers we ordered. Served in spoons featuring a unique curved-handle, we were each presented with a bite size portion of Quínoa con un Chipirón Salteado (Quinoa with Sautéed Baby Squid). If you have ever tasted Fideuà (Paella using thin Vermicelli-like noodles rather than rice) before, than this was an entire plate packed into one spoonful. Judging by the concentrated sea flavor, I would venture to say they had been cooked in Fumet, a fish and seafood based broth. A fine precursor to our next dish. 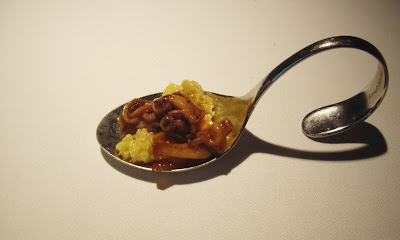 Cebiche (also spelled Ceviche) is a part of Peru's national heritage and typically consists of marinating and serving white fish in onion, lemon juice, Ají chili pepper and salt. But similar to Paella (mentioned in a previous entry), many different variations to Cebiche are now found, as evidenced by the Astrid & Gaston menu. We selected the Cebiche Nikkei - Atún Rojo en Leche de Tigre de Ají Panca y Sésamo, Rocoto y Piña- (Tuna Marinated in Tiger's Milk -the Peruvian term for the citrus-based marinade that cures the seafood in a Cebiche- with Peruvian Chili Pepper, Sesame, Capsicum and Pineapple). The bright red cubes of tuna were garnished with bean sprouts, julienned spring onion, ginger and peanuts and tasted ridiculously good. No bite was similar to its predecessor as each consisted of new flavors and textures. Instructed to eat the Cebiche with a spoon to savor the Leche de Tigre, the lone piece of tuna fell apart in my mouth. But when combined with a peanut, onion and/or ginger, the tangy, crunchy sensations were astonishing. I couldn't help but sip up the marinade with my spoon once it was all that was left in the dish. 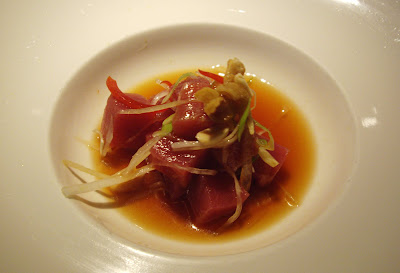 I didn't expect our next dish to match up against the Cebiche Nikkei, but the Tiradito Ponzu -Salmón con Mirín, Soja, Zumo de Naranja y Sake topped with Ensaladita Crujiente de Wakame- (Salmon Slices Marinated in Mirin, Soy Sauce, Orange Juice and Sake Topped with Seaweed, Ají, Onion and Turnip) was equally as good yet completely different. Rather than being served in cubes like the tuna, the salmon was presented in square slivers that dissolved as soon as they hit my tongue. An explosion of aromas and flavors simultaneously stimulated the nostrils and taste buds. I thought the price was a little steep at 21 Euros for six small slices, but it's a lot of bang for your buck. What I also appreciated about the Tiradito Ponzu were the utensils provided to enjoy it. Although I am not a Southpaw, for some reason have always held a cutting or fish knife in my left hand, but for the first time ever, at Astrid & Gaston I found myself using an ambidextrous fish knife. Nice touch on their part. 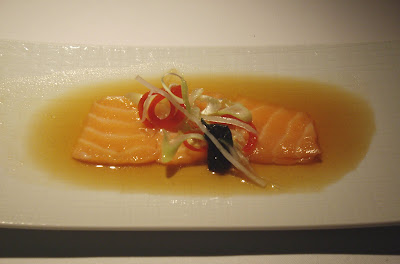 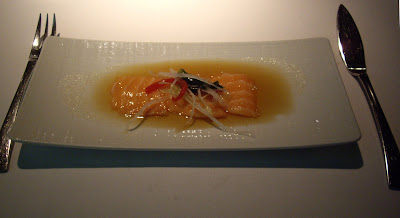 Slightly buzzed from my Pisco Sour and with my belly more full than expected, our main dishes were brought to the table much to our delight. Rather than both ordering fish, I opted for a meat dish so we could try a little of everything. Our waiter recommended the Ternera en Tres Texturas -Carrillera Estofada al Ají Panca, Solomillo Asado, Tuétano en Tostada, Puré Batido Relleno de Cebollitas y Jugo de Eestofado al Ají- (Three Textures of Beef -Beef Cheek Braised with Peruvian Red Pepper, Roasted Tenderloin and Toasted Marrow accompanied by Potato Puree with Small Onions and Reduction of Braised Beef Cheek-), and I wasn't going to second guess him. The braised beef cheek, which was smothered in the reduction, was so tender that it literally fell apart as I went in for the first bite. Although a little on the salty side, the Ají gave it just the right kick. I noticed the tenderloin was also a tad salty, but it was perfectly cooked and topped with a not-too-pungent house Chimichurri. I had never tasted marrow before, and had I not known that it was in fact that, I would have thought I was eating a continuation of the potato it was served on top of. It was neither gelatinous nor fatty, but rather firm. Quite pleasant actually. 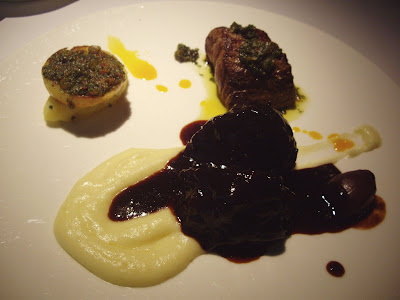 The other entrée selected was the Pez Mantequilla - Churrasco Marino con Chimichurri Parrillero, Quinoto de Vegetales Asados y Reducción de Parihuela (Grilled Atlantic Halibut topped with Chimichurri Sauce, served over Roasted Vegetable Quinoa Risotto and Seafood Soup Reduction). Not to be confused with Pez Mantequilla found in Japanese restaurants in Spain, which is actually Sablefish, the halibut tasted almost like swordfish. It was mild, sweet, flaky and tender, but still firm and spectacular tasting. The Quinoa risotto was cooked just right, and when eaten with the fish and reduction made for a scrumptious selection of ingredients by the chef. 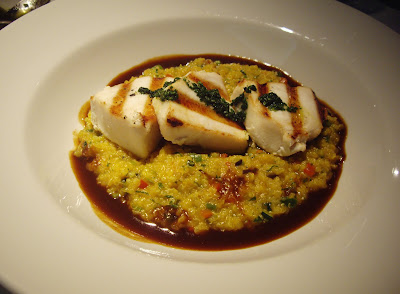 Not one to usually order dessert, we figured we should at least try one of Astrid & Gaston's specialties, the Esfera de Chocolate -Derretida con Compota de Frambuesa, Helado de Lúcuma y Espuma de Crème Brulée- (Chocolate Sphere filled with Raspberry Compote, Lucuma Ice Cream and Crème Brulée Foam melted with Hot Chocolate). Lucuma is a subtropical fruit native to the Andean region of South America and commonly used to flavor ice cream in Chile and Peru. In this instance, it provided another delicate touch to the already elaborate dessert. The waiter poured the hot chocolate over the unassuming sphere, and as it melted it revealed a white ball of ice cream and the foam. The medley of hot, cold, liquid, solid, crunchiness, silkiness, fruit, chocolate and caramel was astounding. As my companion so adequately called it, the Kama Sutra of desserts. 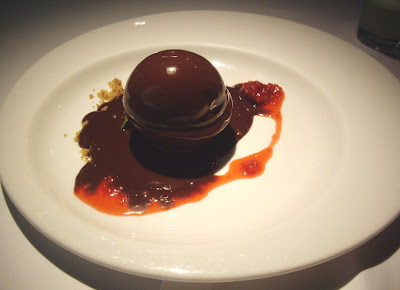 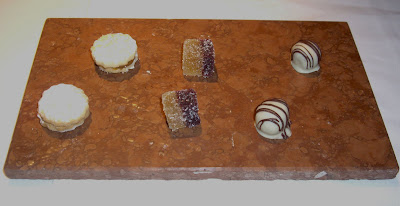 A complimentary selection of petits fours was presented prior to receiving the bill. From left to right, Dulce de Leche biscuits, Pineapple and Chicha Morada (a very well known soft drink made of purple corn, fruits, cinnamon, cloves, sugar and lime juice) Gummies and Chocolate Bonbons, all of which were delicious. It was another small detail on top of an already heavenly meal; and one that would surely make me go back for more. Buen Provecho! rating: 5/5
Posted by Matt Goltz at 11:35 AM No comments: