There is no better way to launch this blog than a review of my recent long weekend in País Vasco, the culinary epicenter of Spain and perhaps the world, with great friends and succulent food. While there were no first-time visits to eateries belonging to world-renowned chefs of the likes of Arzak, Aduriz, Berasategi or Subijana, I can honestly ask, "What's the point when you eat just as well for a fraction of the cost?" Over a 3.5 day/4 night period the four of us spent approximately 650€ on food and drink, while a menu desgustación (set tasting menu) at Arzak costs 150€-200€/person. You do the math, and when you return from San Sebastian let me know if you ate as well as I did. On that note, what follows are reviews of the bars, tabernas, bodegas, restaurants (Jatetxea) and asadores visited (in no order of preference) on this gastronomic tour of Basque Country. Buen Provecho! 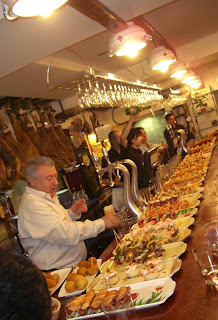 Nagusia Lau was my first taste of authentic Basque Country and it didn't let me down.  There was a great crowd and the bartender/waitress provided rare good service for Spain (something I will discuss in a later review). I tried two pintxos at Nagusia. First, the Tartaleta de Pulpo (octopus tartlet topped with diced marinated bell peppers and onion). The pastry was a little bland and didn't crumble as I expected it to, but the octopus was fresh as can be and the topping added enough sweetness to make up for the drab tart. Then I tried the Brocheta de Rape y Gamba (Monkfish & shrimp brochette). The two chunks of fish could have been a little more lean, but they still tasted great grilled alongside the shrimp and three wraps of bacon. Buen Provecho! rating: 3/5 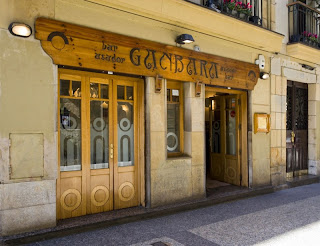 In business for over 25 years, Ganbara (http://www.ganbarajatetxea.com/presentacion&lang=es) is mostly known for their Hongos a la Plancha (grilled wild mushrooms). Our trip coincided with the end of the wild mushroom harvesting season, but it didn't stop us from stuffing our faces with hongos throughout the trip. Unfortunately for Ganbara, however, theirs were expensive and dull. To charge 18.50€ for a small plate of shrooms and not even include the traditional egg yoke on top was quite outrageous. On a positive note, I did sample my first Txakoli, a local wine that was a perfect fit for the native flavors... And Ganbara's was one of the best. Buen Provecho! rating: 2.5/5 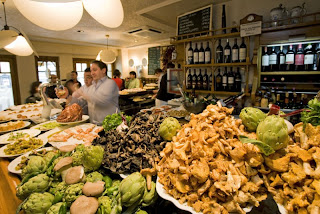 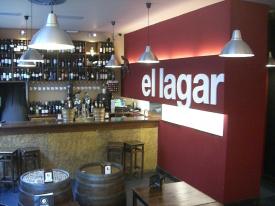 Our first encounter with the "New Basque" cuisine took place at El Lagar (http://www.el-lagar.net/swf/base.html). While the small bodega offered some of the smallest, tastiest and best-presented pintxos of the trip, the only Ración (large appetizer) ordered disappointed in that the sun-dried tomato infused olive oil drizzled over the Cecina was too strong and diminished any taste of the cured meat. 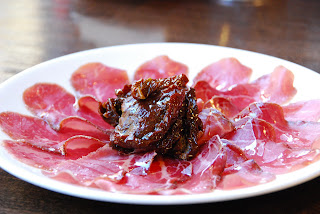 I was much more impressed with the five dishes that followed. Although they could all fit in the palm of my hand, they drove my taste buds wild and several that I don't typically enjoy actually tasted pleasant, the first being Foie. It was a very generous serving presented on a thin cracker drizzled with what appeared to be either Oloroso or Pedro Xímenez reduction and topped with chopped apple compote. Although I am quite particular when it comes to pungent cheeses, the pintxo of Queso de Cabra served with a walnut and sliced pistachios and drizzled with honey was also very enjoyable and melted in my mouth. 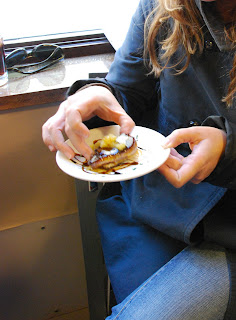 My two favorite dishes at El Lagar, however, were the Cazuelita de Hongos y Patatas al Horno con Huevo de Codorniz (baked slice of potato and wild mushrooms topped with quail egg) and the Solomillo (tenderloin). It is amazing how they fit so many ingredients into such a small casserole dish, but the blend of flavors was perfect. If only I didn't have to share it with three other people! The tenderloin was also quite tasty, but what impressed me the most about it is that it was served so simply... with three homemade potato chips as crunchy as can be.  The only pintxo I wasn't too keen on was the Manitas con Morro (pork meat from the feet and snout). Presented as what appeared to be a squashed sausage, it wasn't necessarily the ingredients that turned me off because I will try almost anything, but rather the saltiness of the dish. Buen Provecho! rating: 4/5 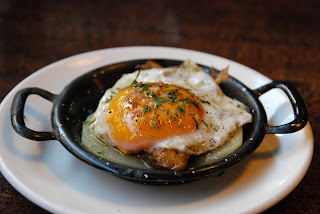 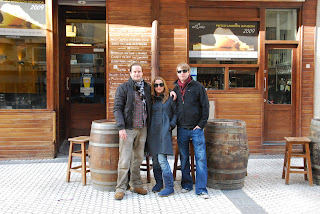 Right next door to El Lagar sits MilCatas (http://www.milcatas.com/portada.html), which when translated literally means One Thousand Tastings, and do they ever mean it. There could quite easily be over 100 wines to choose from and the pintxos menu includes the 2009 Guipuzcoa Pintxo Champion, Vieira con Berberechos, Cítricos y su Aire (scallop with cockle, citrus and foam). 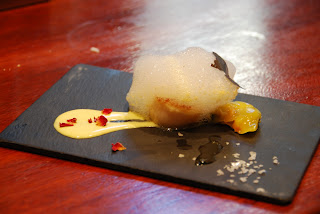 It was an amazing mix of flavors joining together in my mouth, but I think what pleased our pallets most of all was the Arroz Cremoso de Hongos y Foie con Parmesano (wild mushroom and foie risotto with parmesan). Delicate, creamy, smooth and rich, but not enough so to prevent us from ordering two. 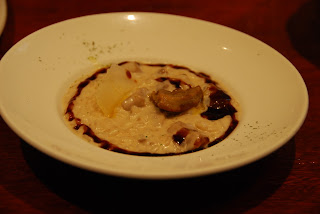 We also had room for two orders of Hongos a la Plancha con Suave Ali-Oli (grilled wild mushrooms with light aioli), but unfortunately the "light" aioli negated the savory taste of the hongos. Our final dish was none other than Rabo Glaseado al Curry con Chips de Patata (oxtail with a curry glaze served with homemade potato chips). The meat was served off the bone but in oxtail form (thanks to a ramekin) and as tender as can be with a slight hint of curry. It was probably the best oxtail I have ever eaten, and not because I didn't have to pick at precious pieces stuck to the bone. Buen Provecho! rating: 4/5 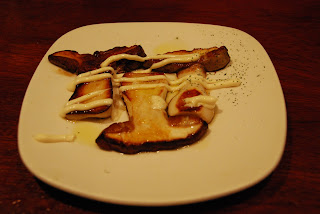