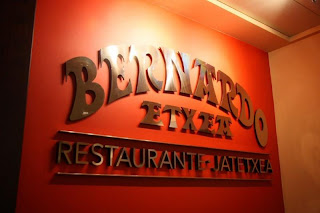 A trip to San Sebastian isn't complete without a proper seafood meal, so we decided to try our luck at Bernardo Etxea (http://www.bernardoetxea.com), and it definitely didn't disappoint (it's always a good sign when  a restaurant is packed to the brim with locals sipping on beer and wine). The only thing I didn't find appealing was the back room ambiance as it reminded me of a hotel lobby. That said, we weren't there for the restaurant's aesthetics. We wanted marisco and got just that, although our first course was an excellent ensalada mixta (mixed salad). The vegetables in this neck of the woods are divine and every ingredient in the salad tasted like it was picked that day. The lettuce was sweet and crunchy; the tomatoes intense in flavor; the onions so flavorful yet mild that you could eat them like apples. What a great way to prepare for our next course... Ostras (oysters). 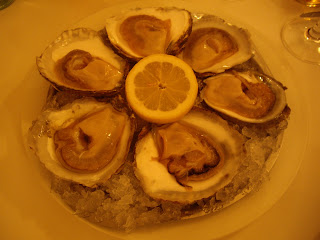 Oysters in Spain do not come with all the accoutrements as when served in the US. There is no horseradish, Tabasco sauce or cracker to kill the flavor. So if you don't like the salty, seawater taste, these are definitely not for you. You will be missing out on a fine delicacy though. Bernardo Etxea's oysters were some of the best I  have ever eaten (or swallowed) and the favorite meal item for my pals. Next on tap were Cigalas Salteadas (sauteed Dublin Bay prawn, langoustine or scampi). Like oysters, the langoustine in Spain do not resemble those of the US... The small, red, pain-in-the-ass to eat midgets you find in Louisiana. These are real Norway lobsters with plenty of fleshy meat to look forward to. Easy to find in Madrid as well, the cigalas at Bernardo Etxea were good, but nothing out of this world. What I did thoroughly enjoy however was our final dish, the Txangurro al Horno (baked spider crab), which is another specialty of Basque cuisine. 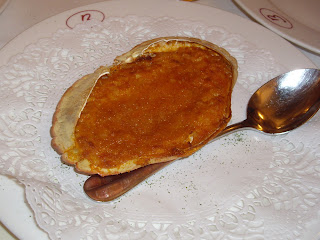 The dish is prepared by baking all the meat (previously removed and cooked with vegetables, spices and brandy)  in the original crab shell. The final product is rich, flavorful and fills you up, but not initially. The taste actually reminded me of Empanadillas de Atún (tuna pasties), but with crab rather than tuna, of course. The tomato base was also much more firm and delicate than that of an empanadilla.

As I mentioned in my first post, I would like to briefly discuss the service received in restaurants in Spain. Gone are the days when a lady would take you coat or jacket and fine gentlemen would wait on you hand and foot. What you tend to find now is a reflection of the incompetent, lazy and overall inefficient mindset that has swept through the country. While I won't get into the politics of it all, I must say that Bernardo Extea was a wonderful and unexpected respite from what has become a drawback of going out to eat in Spain. The service our two waitresses provided was impeccable from the moment we walked in without a reservation. Although we made it clear that we would be leaving before their first reservations arrived at 10 pm, they didn't hesitate to seat us. With only six ostras and six cigalas coming in each order, they later asked us if we would like eight of each so that we each could have two. We obviously didn't hesitate to say "yes" because we didn't have an issue paying for the extras, but when the bill came we were all astonished to see that they didn't charge us for them. While years ago such a nice gesture may have been more commonplace, nowadays it is rare to find. And it only added to the fine dining experience we had at Bernardo Etxea. Buen Provecho! rating: 4/5

The first of two trips outside San Sebastian took us to Tolosa, which is famous for its Alubias (beans). While the origin of these beans is up for debate, Alubias de Tolosa have been linked to the town since the first weekly market took shape in 1256. Our destination was Botarri, which cooked up some incredible beans and the traditional side dishes to mix in. The beans were soft, meaty and had an exquisite taste. They were delicious all on their own, but after adding the Chorizo, Morcilla  de Beasain (blood sausage), Berza (cabbage) and Guindilla (green chili pepper) the flavor was simply indescribable. 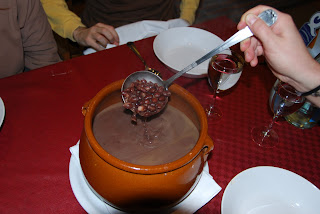 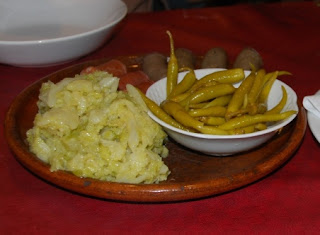 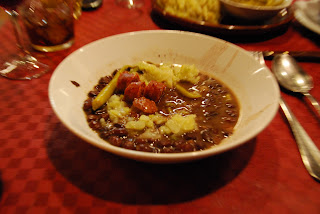 After stuffing my face with two bowlfuls of alubias it was time for the second and last course, which no one had room for. The Churrasco (grilled steak) was a bit bland and rubbery, but perhaps it was just because I was so full. But along with the Pimientos de Piquillo (red piquillo pepper) it did make for a great midnight snack after a long poker session later that night, but we couldn't have picked a better day to have such a hearty meal as the rain fell in País Vasco. Buen Provecho! rating: 4.5/5 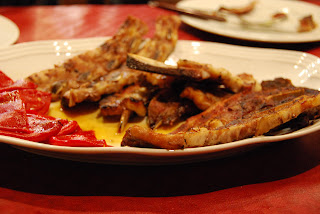 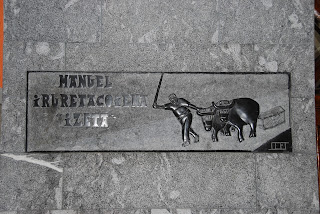 Without a doubt the best meal I had in País Vasco and probably among my top five ever. We really lucked out by finding Izeta (http://www.izeta.es), a cider house/steakhouse located outside the town of Zarautz. I won't even discuss the salad and white asparagus we had as appetizers because they were just as good, if not better than the salad from Bernardo Etxea. All the rest was absolutely incredible! We had surf, we had turf and we had whatever the chicken part of that is called. Let's start with the surf... an entire Rape a la Parrilla (grilled Monkfish). The meat just fell off the spine and melted in my mouth like top grade sushi. It was firm yet flaky and the oil and parsley-based sauce that had been drizzled on top was an added bonus for mojando (dipping bread in). It was also the first time I tried a Spanish delicacy known as Cocochas (fish cheeks), which were just as amazing as the rest of the fish but harder to get to. I would compare it to eating a chicken wing. It's pretty obvious we didn't like it... 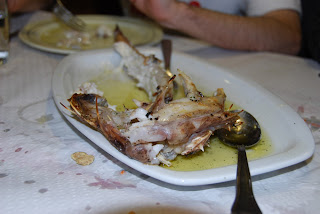 Then came out the turf... A massive hunk of Chuletón (steak) that drew more camera flashes than would Justin Bieber getting caught making out with Lady Gaga. It was the juiciest, tender, perfectly-spiced and grilled piece of meat I have ever laid my chops on. The chicken was pretty good too, but nothing could have topped the surf and turf at Izeta. Buen Provecho! rating: 5/5 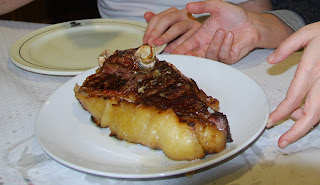 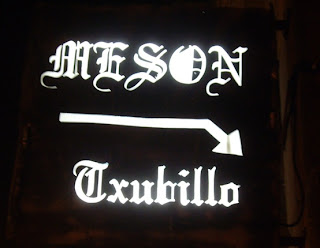 By far one of the worst restaurants I have been to in my lifetime, Txubillo (http://www.txubillo.com/portada.asp) was an epic FAIL! Hyped as quality fusion between Basque and Japanese, this little Mesón deserves to be the next target of ETA, the Basque separatist terrorists, God forbid they ever strike again. The locale was small and cramped, the service from the minute we set foot in the door was abominable and the food was flat out disgusting. First on deck was an Ensalada de Setas y Pato (mushroom and duck salad) that had little, if nothing to it. Then came the sushi tasting menu that included eight hosomakis made with CANNED TUNA and SURIMI crabmeat, a crappy California roll and nigiris of shrimp, salmon and scallop. It was all bad. I am still surprised none of us got sick off the scallops. The last two dishes included Unagi no Kabayaki (eel) that tasted as bad as it looked and a Foie with Teriyaki sauce, which I didn't have the stomach to try based on the abysmal quality of everything else. What really pissed me off the most about this place was the price, which came out to be 10 euros less than Izeta. Txubillo is the first restaurant Buen Provecho! has the pleasure of 86ing (for those of you not familiar with restaurant terminology, this means to cancel someone's order, that a patron has been refused service or that, most commonly, a certain item is no longer available). Buen Provecho! rating: 86
Posted by Matt Goltz at 2:10 PM