Almost three months have passed since my last post, but due to time restraints I simply wasn't been able to find my way to a restaurant for a proper meal until now. After several recommendations from friends, I decided to do it up with a visit to Shikku Izakaya (http://www.shikku.es/izakaya/index2.html), the second of two Japanese restaurants opened by former Suntory chef, Rafael Sánchez. 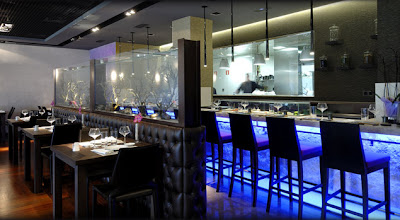 I must say I was quite impressed with the modern, elegant feel, and the service from the minute the hostess took our coats was impeccable. The waitstaff was really on the ball and not once did I need to turn my head from the conversation to get the staff's attention. Unfortunately, however, there was a stark contrast to the quality of the actual meal. Not that it was bad, but for a restaurant that draws a posh crowd and charges the prices it does, I was expecting good or better, not mediocre.

Because I wanted a little taste of everything, I ordered an assortment of dishes consisting of vegetables, fish and meat. First up, the Tataki de Atún con Aguacate y Salsa Kaba-Yaki (Tuna Tataki with Avocado and Kaba-Yaki Sauce) and Sunomono de Wakame y Pepino (Cucumber and Wakame Sunomono).

The Tataki, or Seared Tuna, was by no means near the quality of others I have tried. In fact, I recently made some myself in Hawaii and I would say it was much better. The fish didn't taste sushi or sashimi grade, and even if it had, the sauce, albeit good, took away all the fish's flavor. And if you want to nitpick, the fish and avocado could have been sliced much nicer. 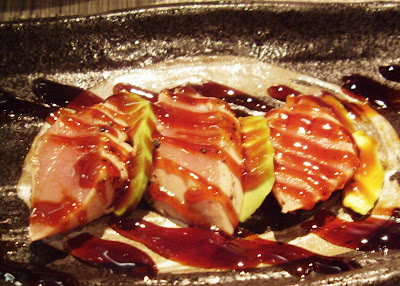 The Sunomono Salad was nothing to write home about either. I don't know if Shikku is trying to stray away from the standard version you find in most traditional or even other "modern" Japanese joints, but had I wanted a big bowl of seaweed, I would have bought it and made it myself. I personally enjoy my Sunomono with equal parts Wakame and cucumber. With the dressing needing another dash or two of vinegar (the prefix SU in Japanese means vinegar), I begin to question the personal touches on traditional Japanese cuisine.

Moving on, it was time for what I usually enjoy most... the Nigiri. But much like the Sunomono, I don't understand the need for so many fancy toppings and ingredients on such a small piece of food. While the presentation was lovely, the Hamachi (Yellowtail) would have been much more savory sans whatever it was topped with and the Gunkan de Wagyu con Trufa (Wagyu Gungan with Truffle) tasted only of truffle oil. While a big fan of truffle oil, chefs have come to rely on it too often and in too great a quantity. Wagyu is known for its tender, enhanced and juicy flavor, but the oil killed all of it. I left my favorite piece for last, the Pez Mantequilla (Atlantic Halibut). Pez Mantequilla has such a distinct flavor and texture and the way it melts in your mouth is delightful. I would much rather have a small sliver on a bed of rice than a larger piece such as Shikku's with a crunchy topping. I am all for a variety of textures, but not when it comes to such an extraordinarily flavored fish. 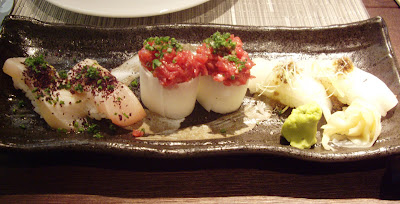 Our final dish of the night, and something which I rarely order in a Japanese restaurant, consisted of chicken; more specifically the Pollo Macerado en Soja y Gengibre (Chicken Marinated in Soy and Ginger). Although the flavor was subtle and delicate, which caught me off guard being that soy is so salty and ginger piquant, the chicken was dry and fatty. The least you expect from a restaurant frequented by "high society" is a lean, tender and moist piece of chicken.

Although I didn't try any of Shikku's higher priced star dishes such as the Black Cod Macerado en Salsa Miso (Black Cod Marinated in Miso Sauce), I am actually quite happy I didn't even consider it judging by the quality of everything else. And unless someone offered to treat me to another meal at Shikku, I don't think I will be returning to try it. Fortunately, the company I shared the table with made up for such a mediocre dining experience. Buen provecho! rating: 2.5/5
Posted by Matt Goltz at 9:23 AM