With my time in Spain likely drawing to an end, I have made traveling and pleasing the pallet a top priority. But no need to worry. Although it is unlikely that I will get to return to many of the restaurants that I have frequented in my 19-plus years here, my memory serves me well and I will continue to update this blog.

That said, a couple of weeks ago some friends and I headed up to Segovia and La Granja to see the sights and have a nice traditional Castilla y Leon lunch. I picked the spot, and having never been to La Granja had only websites to work with. While most restaurants in the area serve the same dishes, my intuition didn't fail me. La Taberna del Pelón (http://www.latabernadelpelon.com) had a rustic home feel and the grub was as casera (home-made) as it gets. 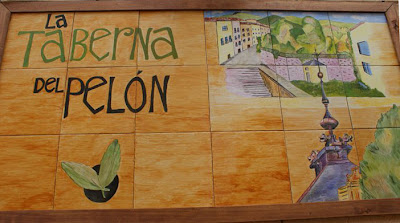 I started with a Gazpacho (although originally from Andalucia I was looking forward to my first of the spring for quite a while), the ladies shared the Ensalada Templada con Crujiente de Cabra (Mixed Greens Salad with Fried Goat Cheese) and my mates had the Sopa Castellana. The salad was presented beautifully with a savory red berry vinaigrette and the cheese was lightly battered and fried to golden brown perfection. The Sopa Castellana (Castillian Soup) isn't for those without an appetite or a weak stomach. It was the heaviest soup I have ever tried and would have been much better on a frigid winter day. Apart from being served piping hot, its ingredients include bread, eggs, garlic, ham, chorizo and paprika. Needless to say, a meal on its own. 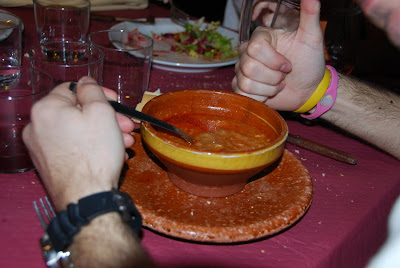 For our second course, I chose the Chuletas de Cordero (Lamb Chops) and my friends ordered the Cochinillo Lechal Asado (Roasted Suckling Pig). Much to my delight, the chops were seasoned to perfection, meaty, tender and lean, which on many occasion isn't the case in Spain. The fries were also good, but you will rarely find poorly made ones in this country. 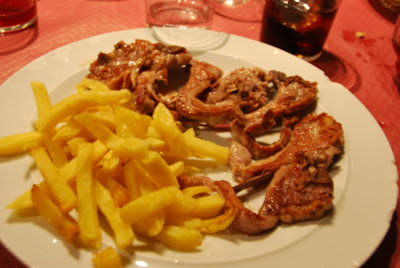 Although I am not much of a Cochinillo fan, the suckling pig was... well... succulent. The taste wasn't as overpowering as past experiences and the meat just fell apart in my mouth. I didn't try the skin (nothing goes to waste here), but I was told it was crunchy and added a nice combination of textures. 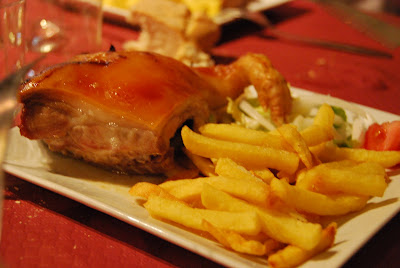 We were too full to order any dessert, but even if we had, several of the items had already been 86ed, which is surely a good sign. I would give La Taberna a high Buen Provecho rating based on quality alone, but the service lacked something to be desired. The restaurant was pretty full, but you would think the wait staff (family members) would have less of an attitude and be more gracious. Buen Provecho! rating: 4/5
Posted by Matt Goltz at 5:37 AM