With some special friends in town, I decided to treat them to a special dinner at one of my favorite spots in Madrid, Bistro Caripen. I hadn't been in quite a while, but my first pleasant surprise was that they actually picked up the phone on my first try the night I called to make a reservation. It had always been a painstaking task in the past, so I was sure it was a sign that the meal was going to meet or exceed my expectations. And it did both. 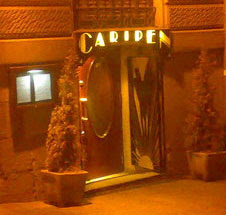 One of Caripen's specialties is the Mejillones de Roca (Mussels served in a White Cream Sauce), so I couldn't afford not to order them having promised my companios some of the best mussels ever. Served in a casserole pot as a standard French dish, the mussels were simply divine. Not too easy or overboard on the cream and not too big as to displease the eye. The meat easily tore away from the shell and at not once did we notice any grains of sand as often is the case. Two of us scarfed down the entire pot in minutes. 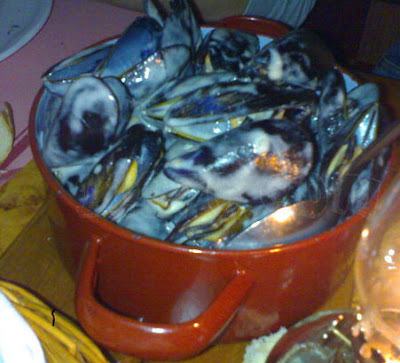 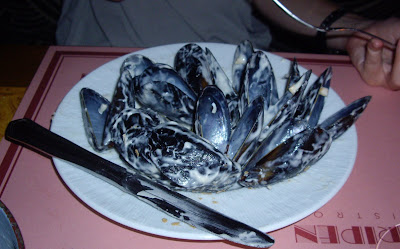 For our main course, two of us shared one of the specials of the night, Fideos Negros con Langostino (Black Tagliatelle with Prawns), while the other ordered one of Caripen's standard menu items, the Spaguettis con Bolognesa (Spaghetti Bolognese). A very generous portion of spaghetti was served al dente in a copper pot and the bolognese was light, subtle and yet extremely flavorful. It could have easily been split between two people. 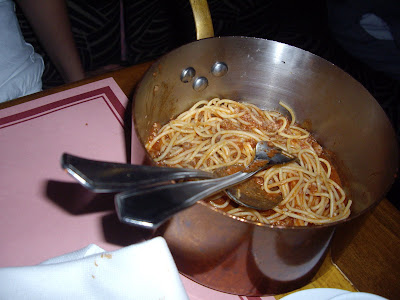 Although the tagliatelle was a bit overcooked and soggy, it still had an extraordinary mix of flavors including a hint of the squid ink it was made with, the garlic it was sautéed in and the prawns that accompanied it, which I must say were cleaned extremely well and very tasty. You won't find many places deveining their crustaceans, but Caripen does a fine job. What at first looked like a small portion of nouvelle cuisine turned out to be more than enough of a scrumptious dish. 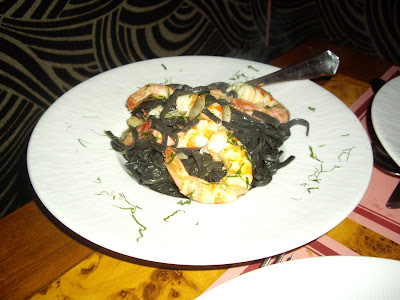 What would a French bistro be without its crepes? So of course we ordered the chocolate and cream crepe as well as the warm apple tart. The former was as light as air. There was just the right amount of chocolate as to be able to savor the pastry and the cream was obviously home-made as it only came apart once in the mouth. 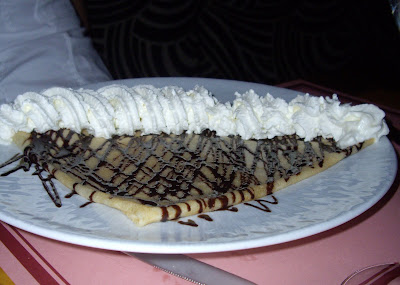 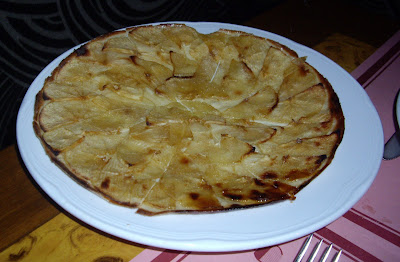 While the tart could have used some cinnamon for some added flavor, what I loved was the thinness of the pastry and the slivers of apple. It reminded me of a traditional Italian-style thin-crust pizza and even had the crunch to go along with it. We had no trouble downing both desserts before being offered a typical standard liquor nightcap. Indeed a special meal with special friends. Buen Provecho! rating: 4.5/5
Posted by Matt Goltz at 6:45 AM