The Chen family has enjoyed tremendous success with their design Asian restaurants in Madrid and its peripheries. Zen, Zen Central and Asia Gallery, the latter which is located in Madrid's exclusive Westin Palace Hotel, are the predecessors of the latest creation, Zen Market (http://www.zenmarket.es). With decor resembling the trendiest eateries in New York and London, Zen Market is unique in that it occupies over 2,000 square meters of Real Madrid's Santiago Bernabeu Stadium, offers many of the more than 300 guests spectacular views of the field, has a lounge bar with a wide selection of cocktails not commonly found in Madrid and even includes 11 private boxes to be used during games. 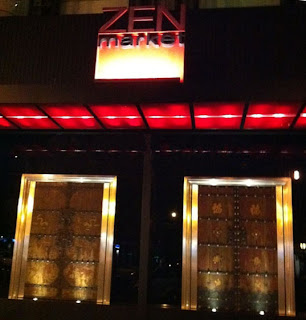 I was accompanied by two friends during my first Zen Market experience, so rather than each ordering first and second courses we decided on one of four Menu Desgustaciones (Tasting Menus). I must say I was initially quite impressed by the prices. Two tasting menus came in at 35 Euros per person and two others at 45. Shocking when taking into account that the restaurant construction and design are rumored to have cost over 5 million Euros.

With pretty large appetites, we decided on the Menu Gastronómico (45 euros per person) plus one of the house specialties, Auténtico Pato Lacada Estilo Pekín (Roasted Peking Duck). As we looked onto a floodlit field that was hosting an event, the immaculate servers at Zen started us off with a small appetizer consisting of mixed field greens, finely sliced veggies and a cube of tempura battered salmon. I must admit that several Asian restaurants skimp on the quality of such on-the-house appetizers, but the ingredients selected by Zen complemented one another extremely well and the light use of dressing brought out each and every flavor. 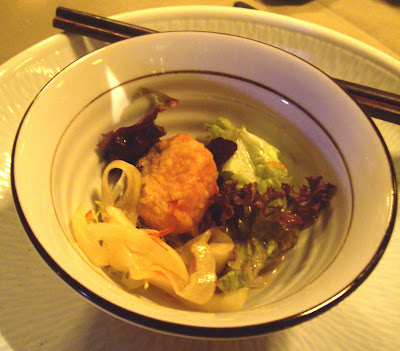 As we sipped on our Pisco Sours, Whiskey Sours and Lychee Martinis (the cocktail menu is quite impressive, but the time it took to make our drinks was less than acceptable for an Asian restaurant boasting to be one of the best in Europe), the first item on our tasting menu was brought to the table. The Sopa de Miso con Almeja Japónica (Miso Soup with Japonica Clam) had the standard taste of any non-instant Miso soup you will find, but the clam that sat in the bowl provided a distinctly unique seafood bite. Had it been a business meeting, date or other important event, however, and I am sure there are plenty that take place at Zen Market, getting at the actual clam would have been difficult without proper dining etiquette instruction. I just popped mine open with my fingers and pulled it out, but there really was no need as it had very little flavor on its own. 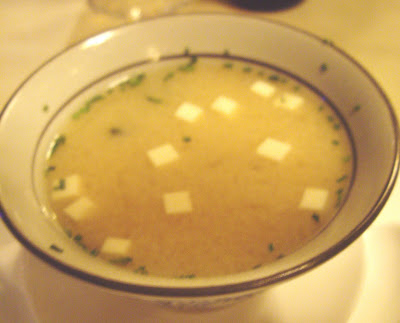 With the soup out of the way and my friends and I on round two of drinks, the waitstaff served the next three plates on the menu: Ensalada de Frutos del Mar (Seafood Japanese Style Salad), Tartar de Atún y Tobiko Negro (Tuna Tartare with Black Tobiko) and Carpaccio de Buey (Beef Carpaccio).

The first was really nothing more than three pieces of Sashimi layed over Frisée lettuce. The one piece of shrimp, salmon and some sort of white fish were very fresh, but lacked the taste you would expect if ordered at any Japanese restaurant. The light dressing over the greens resembled that of the appetizer and I would venture to say it was the exact same. Really? 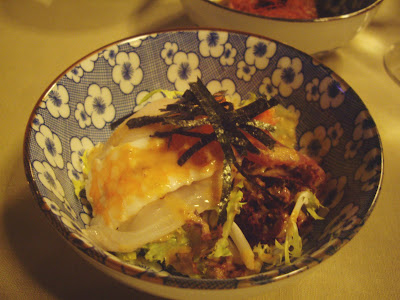 The Tuna Tartare was more to my liking although I have made a conscious effort to avoid eating Ahi (Yellowfin) due to over-fishing of the species. The fish was finely chopped, topped with black Flying Fish Roe and what appeared to be strands of saffron (I have yet to confirm the latter) and sat in what I believe was a Ponzu sauce. The presentation and combination of flavors were both fantastic, but for God's sake don't serve Tartare in a bowl, especially when you expect clientele to use chopsticks! I love Tuna Tartare and prefer it to be more compact than that of Zen's, so after picking at it for several minutes to no avail, I finally gave in to using a fork. 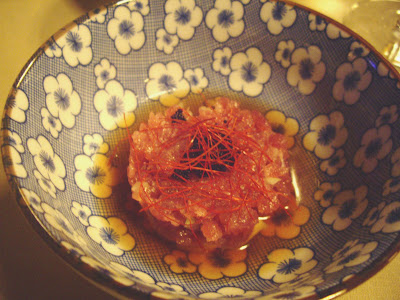 The third dish looked so good but was so disappointing. When I order Beef Carpaccio I expect to receive paper thin slices of bright red meat, perhaps topped with truffle oil and Parmesan. Because Zen is Asian cuisine, I knew that wouldn't be the case. But I was astonished to see their version. What we were served was a bowl containing shredded Daikon Radish and four slivers of flavorless beef Tataki; nothing resembling the slightest hint of Carpaccio. You would certainly expect better from a restaurant priding itself on being one of Madrid's new "places to see and be seen." 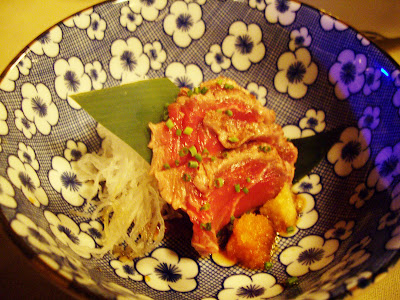 Fortunately for my tastebuds, the next course was my favorite of the night: Bogavante con Sal y Pimienta (Pan Fried Lobster with Salt and Pepper). Two platters each containing half a lobster tail and a claw found their way to our table and I couldn't wait to sink my teeth into them. While the presentation was a bit drab and could have used a touch here and there, the taste more than made up for it. The meat popped right out of the shell and was both firm and juicy. The taste was also extaordinary. The combination of seasoning with the searing from the pan (it looked more seared than fried) gave the lobster an almost tangy flavor. Definitely a must when ordering a la carte.

Before our last two items on the tasting menu were served, we were first shown the entire Peking Duck (as is the custom) prior to it being carved and brought back to us in a bamboo steamer basket. I am not crazy about duck to begin with, but I must admit this was pretty good. I don't know if it was the crunchy texture, the bean sauce, the green onions or the pancake, but I was pretty impressed... Until I saw how much it cost when we got the bill. I know proper Peking Duck involves hours of care, but 70 Euros is a little steep for what turned out to be nine miniature pancakes. 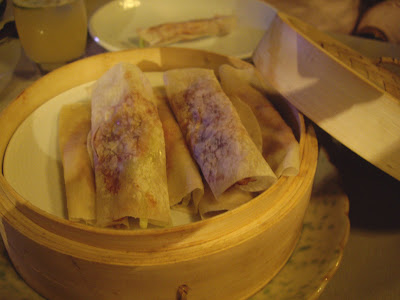 The last two dishes included Magret de Pato y Salsa de Ciruelas (Duck Maigret with Plum Sauce) and Arroz Frito con Marisco (Pan Fried Rice with Shellfish). The Maigret was tender as you would expect from a breast, but I prefer lean meat of any nature and this definitely was not. Although cooking it without removing the fat does add fantastic flavor, the duck would have been more appealing had it been removed prior to serving. The sauce was also satisfactory, but Zen did go a little overboard with it. As a huge rice fan, I found Zen's version with shellfish to be a nice break from what you tend to find in Spain. Here it's either white or Tres Delicias, which includes ham (so wrong in my book). Zen's had subtle hints of shellfish and veggies and was fried just right. Let's see if any other Asian restaurants here take notice. 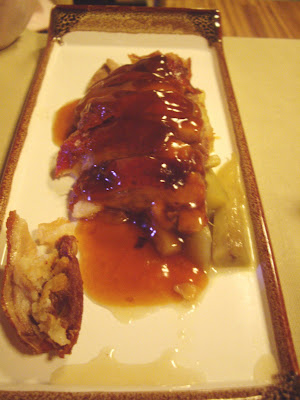 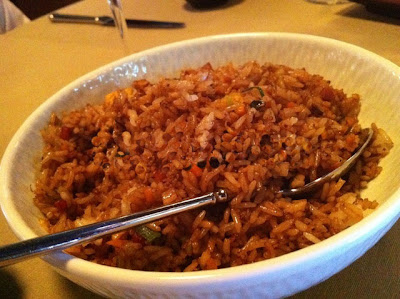 After dessert, which consisted of a ball of Raspberry sherbet, a squeeze of crunchy lemon mousse and what resembled a slice of flan, we made our way to Zen's lounge for a nightcap. The service left much to be desired and after a lot of bickering between the bartender and what appeared to be a cook who was lending a hand, we decided to pick up and leave. All in all, Zen Market provided an impressive ambiance and a very cool setting, but if you want Chinese or Japanese food in Madrid I can think of plenty of other places where you will get much more bang for your buck. I hope to visit a couple and write about them to give you readers some other dining options. Buen Provecho! rating: 3/5
Posted by Matt Goltz at 3:33 AM