Last week I headed down to Marbella for the night before a wedding in Malaga and a weekend that included the Formula 1 in Valencia. A few friends who were already there decided we should hit up a local joint named Taberna Gaspar. Judging by the clientele sitting on the terrace, it occurred to me that this was a hole in the wall that not too many outsiders knew about. Under the name of the outdoor sign reads "Lentos pero torpes," meaning  "Slow but clumsy." Although the service was a little laggard, the food was anything but clumsily made, so in that sense I am not quite sure what they are referring to. You may also notice that many of the items on the menu are fried, which is called Fritanga in Spain and quite common in the South. 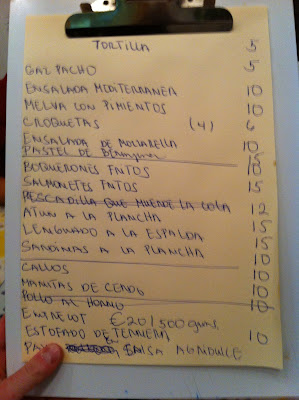 The menu changes on a daily basis according to local markets and only has between 15 and 20 items to choose from, but the mainstay is the Tortilla de Patata (Spanish style omelet/Frittata), which is only prepared for dinner service and topped with Pimiento Rojo (Marinated red peppers). Tortilla comes in many different versions in Spain, but it is classically prepared with egg, potato, onion and salt. After sautéing the potatoes and onions, beaten eggs are then thrown into the pan. Once the bottom side is cooked, it is flipped upside down onto a plate and slipped back into the pan. I have never known of  anyone getting ill from eating runny, undercooked eggs in Spain, but I prefer to eat mine as well cooked as possible. Most eateries in Spain serve their Tortilla with a raw and runny inside, which was why I was so impressed to see that Gaspar served theirs cooked through almost all the way. The potatoes weren't too soggy or undercooked either and the right dash of salt brought out the flavors of every ingredient. 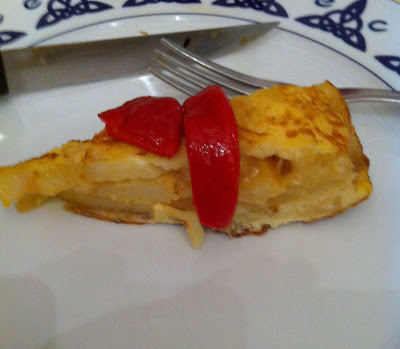 We then shared a plate of Croquetas (Croquettes/Fritters),  which were home-made and fried to a beautiful golden brown crunch. Croquetas are fried potato dumplings and in Spain are typically filled with pieces of ham, as was the case at Gaspar. Similar to Tortilla, Croquetas may be undercooked or soggy, but neither was the case on this night. Ours included just the right amount of ham (two little pieces) and were served with a bright orange garlic sauce that tasted like a mix between Alioli (Aioli) and Chimichurri, which is extremely uncommon. 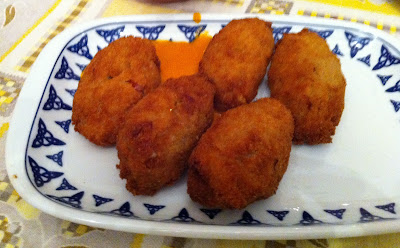 Next up were Salmonetes Fritos (Fried Red Mullet). The fish, which is commonly found in the Mediterranean Sea, was battered very lightly, allowing the bright pink skin to gleam through. The meat fell right of the spine and although considered a white fish had a richer taste than say Bacalao (Cod). The lettuce and tomato garnish also provided a breather from all the Fritanga prior to the last two dishes being brought to the table. 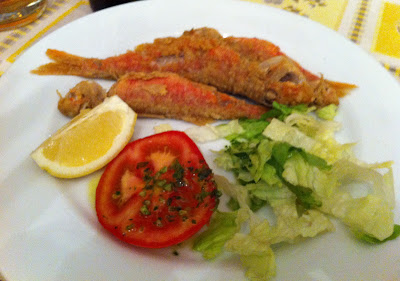 Our first red meat dish was the Entrecot (Entrecôte). The cut had been ordered medium-rare, was served exactly as requested and was just the right amount for the five of us. It was nowhere near the quality of beef served at El Capricho, but for a Taberna (Tavern) it surely did not disappoint. Served in slices, the plate also included the previously seen garlic sauce (not at all needed) and french fried potato slices/chips. 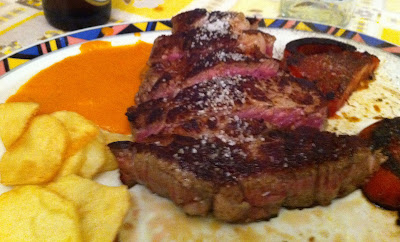 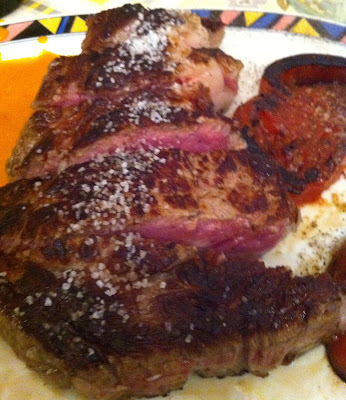 We were pretty full by the time the Albondigas (Meatballs) made it our way, but we managed to scarf them down anyway. Meatballs in Spain are made with a either a mix of beef and pork or just beef, and  fortunately Taberna Gaspar's were the latter. They were cooked just right, which for me meant that I could slice right through them with a fork. The Shiitake mushroom sauce was an unexpected and pleasant touch and the same potatoes that garnished the Entrecot were the perfect companion in terms of both taste and presentation. We washed everything down with another mug of beer and headed out for a night on the town. Buen Provecho! rating: 3.5/5 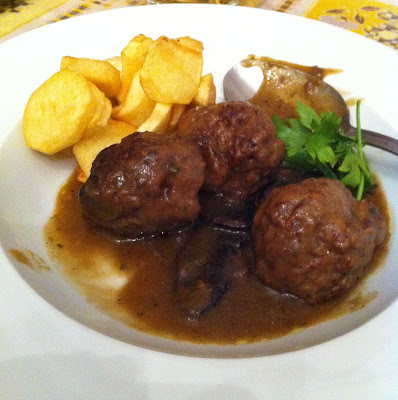