Having been born in Brazil, and soon thereafter introduced to and fallen in love with Latin and South American cuisine, I was over the moon when a friend recently invited me to lunch at  a Venezuelan dive in Madrid. Prior to actually meeting for lunch, I did my due diligence and researched El Güero (http://www.elguero.es). What used to be a strictly Mexican restaurant, El Güero (a word used in Mexico to denote a person with blond or red hair or of fair complexion) began offering Venezuelan cuisine when Alicia and Antonio, a married couple who landed in the Spanish capital many years ago, took over proprietorship of the joint. I also noticed many of the dishes on the menu resembled those found in Cuban or Mexican cuisine, but I was pleased to find out that the Venezuelans added their own touch to what you might take for Ropa Vieja or Gorditas. 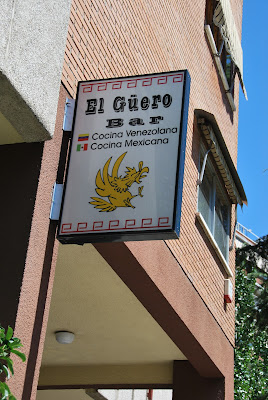 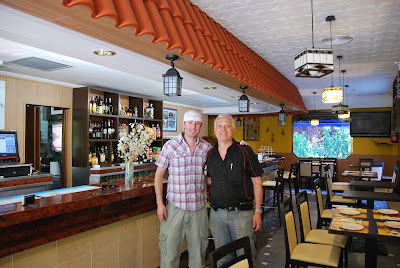 Rather than ordering a la carte, and because it included what I originally intended to order, I opted for the 12 Euro Menú del Día, which in most restaurants in Spain is a set menu from which you choose a drink, an appetizer, entrée and dessert.  To accompany my meal and wash things down, I selected a fresh fruit juice called Parchita, the Venezuelan word for Maracuya (Passion Fruit). Having already tried concentrated Lilikoi juice in the past, which I found delicious but brutal on the taste buds and throat, the Parchita was completely the opposite. It was neither too sweet nor too bitter, and rather than cringing as I sipped it through the straw, it put a huge smile on my face. 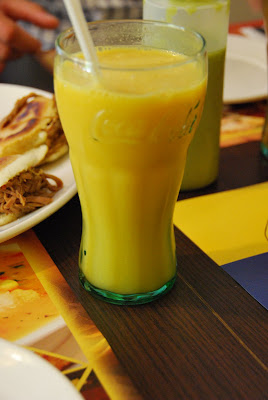 So did the Arepas, which are a traditional national food of Venezuela. Similar to a Mexican Gordita, an Arepa is a round cornmeal patty that is either grilled, baked or fried and then stuffed with cheese, meat, beans, veggies or fruit. On this occasion, I was able to pick two varieties and chose Queso Blanco (White Cheese) and Carne Mechada (Shredded Beef).  Both were delicious. The patty was grilled to a nice crunchy exterior and soft interior, and was much lighter than I expected. The Queso Blanco, which resembled Mozzarella in taste and texture and is actually called Queso Guayanés, was produced in Asturias (a province in Northern Spain) by a Venezuelan family according to Antonio. The Carne Mechada, meanwhile, was similar to Mexican Salpicón or Cuban Ropa Vieja but appeared to have fewer vegetables thrown into the mix. It was lightly spiced and tender as slow-cooked shredded beef should be. 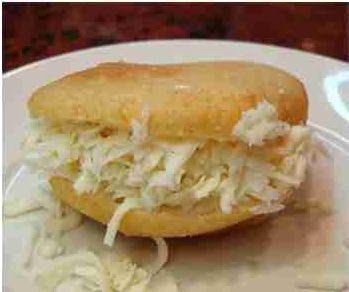 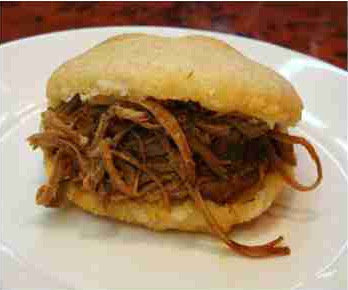 To top the Arepas off, we were brought a bottle of homemade Guasacaca sauce, which is commonly served with meats and fried foods as Chimichurri is in Argentina. El Güero makes theirs by blending avocado with oil, vinegar, onion and Paprika, and boy did it add a yummy kick to the Arepas. Consider it the Venezuelan version of Guacamole. 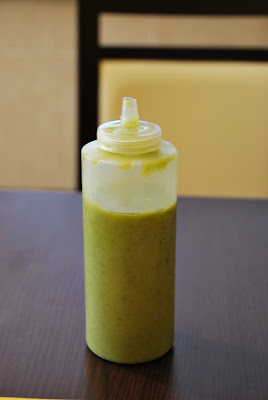 Thinking we weren’t going to have enough food and wanting to try a little more than came with our order, we also decided to share a plate of Tostones con Queso (Fried Plantains with Cheese). The Tostones were cooked just right and had very subtle hints of banana flavor. Of course, we poured the Guasacaca sauce all over these as well and gobbled them right up. 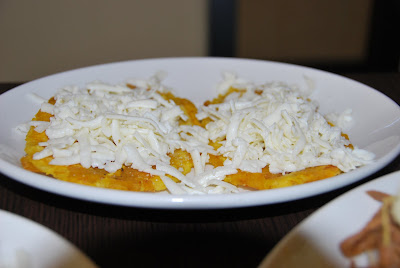 When it came to my entrée, I opted for the Pabellón Criollo, which consisted of Carne Mechada (Shredded Beef), Judias Negras (Black Beans), Arroz Blanco (White Rice) and Tajadas Fritas de Platano Maduro (Pan Fried Unripened Green Plantain Bananas). Again, the plate looked exactly like it came out of a Cuban kitchen... Ropa Vieja, Moros y Cristianos and Platano Frito... But the taste was anything but Cuban. The Beef was the same as that used in the Arepa, which I found pleasing to begin with. The Black Beans were a little on the bland side, but put beans in front of a Brazilian and they’ll go down with no complaints. The rice was also good. It had that nice South American flavor to it, which you have to taste to know what I am referring to. I have never been a banana eater. In fact, I despise them. But I am willing to try everything on this blogging adventure I am on and I must say I didn’t leave any trace on the plate. I don’t know if it was the sweet caramelization or the firm, non-mushy texture, but the Platanos were darn good. 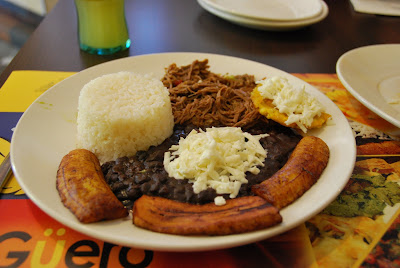 My two lunch mates selected the Patacón Relleno con Carne, which was like a Fried Unripened Green Plantain sandwich. The two layers of banana were filled with Carne Mechada, a homemade Tartar sauce, Pico de Gallo (Chopped Tomato and Onion) and White Cheese. What an incredible combination of flavors. And what a fun dish to eat, especially when drenched in Guasacaca sauce. 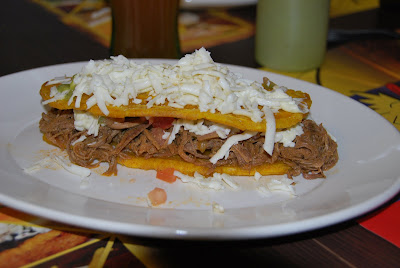 With barely any room left in our stomachs, we then had to decide what to order for dessert. I chose the home made Crepe de Cajeta, an extremely thin crepe or pancake doubled over and filled with the caramel-like milk-based sauce similar to Dulce de Leche. Many times you will find that the Cajeta is too thick or too warm, but El Güero’s was light and just runny enough to make me have to scoop every last drop off the plate with a spoon. Our other desserts included the Tarta de Tres Leches (Three Milk Cake), a sponge cake soaked in evaporated milk, condensed milk and heavy cream and topped with meringue, and Helado de Vainilla (Vanilla Ice Cream) sitting in chocolate sauce and topped with strawberry sauce. These, too, were outstanding and a great ending to an even better meal. 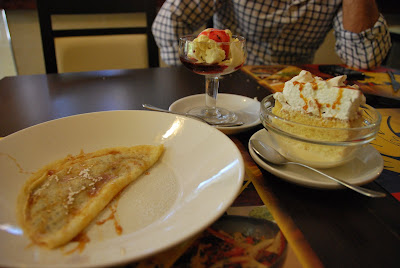 I left El Güero a very happy camper and would certainly go back for more of its delicious Venezuelan cuisine, but if given the choice between Brazilian Feijão, Cuban Ropa Vieja with Moros and Cristianos and Venezuelan Pabellón Criollo, I have to admit that 98% of the time I would jump at the former two first. But that's just me being partial! Buen Provecho! rating: 4/5
Posted by Matt Goltz at 1:48 PM