When told I would be having lunch at a recently opened Mexican restaurant located in the outskirts of Madrid, I must admit I was a bit skeptical. But as we drove up to Central Mexicana (http://www.centralmexicana.es), it was the only joint in a long strip of restaurants that was completely packed. What first grabbed my attention was the large front deck crowded with tables and a large open window that gave way to the inside, where other guests enjoyed their meals with a nice breeze blowing through the entire eatery. The setup was just the first of many surprises. 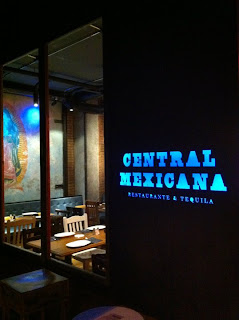 As soon as we sat down we were brought a bowl of chips and two kinds of salsa. One was Tomatillo based and the other Chili based, but neither was spicy. And that is coming from a quasi-Texan. Spaniards may think otherwise. The chips were fresh and like none I have tasted before in Madrid, but I didn't ask if they were home-made. 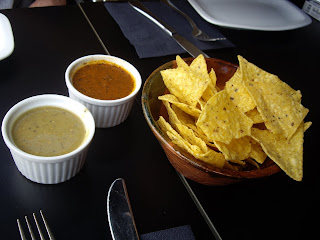 We began with an order of Guacamole and Frijoles Refritos (Refried Beans). Although I prefer mine, the Guac was delicious. The avocado was mashed perfectly, not too creamy and not too chunky, and the subtle hints of onion and cilantro were just right. It was also well-seasoned and the pomegranate seeds added a nice hint of contrast and texture. The Frijoles were just as good. And the fact that they were black beans made them even better. I could have done without the few chunks of chicken floating around, but I didn't mind in the grand scheme of things. The beans were also topped with some queso fresco, which was a nice touch. 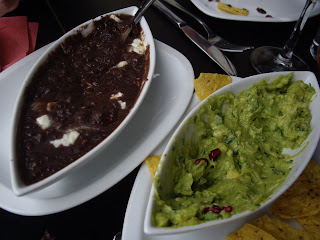 For our main courses, one of us ordered Queso Fundido con Chorizo (Queso w/ Chorizo), another decided on the Tacos de Bistec (Beef Tacos) and I got the Arrachera 'Rosarito' (Flank Steak). We all thoroughly enjoyed our dishes, but I did not try anything other than mine. Based on appearance alone, I don't know if the Queso would have been to my liking. Its orange color immediately reminded me of Velveeta. I was assured it didn't taste as such, but I declined a sample anyway. 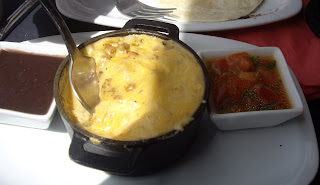 While I didn't taste the Tacos either, they did look fantastic. The beef was diced into small pieces and served on two small flour tortillas with chopped onion and cilantro on the side. Speaking of tortillas, and although I prefer corn, Central Mexicana's were small, light and not too doughy. My plate was such a large portion of food, unexpected at lunchtime, that I ate with a fork rather than stuffing my face with rolled fajitas/tacos. 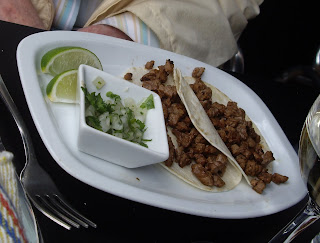 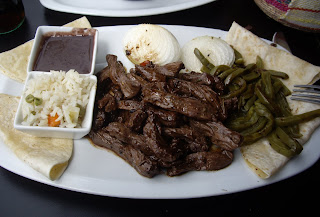 The Arrachera was delicious. The slivers of steak were bite size, seasoned very well and tender to my liking. The plate was served with small sides of rice and beans, a grilled onion and Nopalitos (Prickly Pear Cactus), all of which accompanied the dish well. I would definitely recommend it to anyone with a beef craving. Of note, and I'm not sure if it was because all the waitstaff (including the owner, Salvador) is Mexican, but the service was outstanding, which is hard to find nowadays in this country. Buen Provecho! rating: 4/5
Posted by Matt Goltz at 6:15 AM